Since 1964, the Ethical Society has resided in a striking, spacious building on Clayton Road. This oft-photographed structure was designed by Harris Armstrong, a nationally known modernist architect. The skyward thrust of the roof symbolizes the Society's aim to bring out the best in the human spirit. The wood-paneled interior maintains this architectural statement and combines with the carefully planned configuration of the auditorium to provide acoustics that are among the best in the St. Louis metropolitan area. The auditorium also includes the first baroque tracker organ built in the St. Louis area. The organ was generously donated to the Society in 1965 by member Genevieve Hail in memory of her husband. 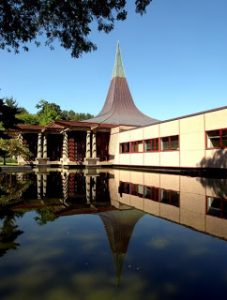 The original building initially offered ample space for Society's ceremonies, gatherings, and programs, However, the growth of the Society in the 1980s and 1990s required more space and prompted the addition of a new wing. This wing features more meeting rooms and office space, a well-lit entry and stairwell, and an elevator. Construction of the new wing was supported through a capital campaign of Society members, including a generous donation from Harold Hanke, to whom a meeting room in the new wing was dedicated.

This building has various rooms to rent. If interested, see Building Rentals for more information.

As the Society's first meeting house fell into disrepair the search began for a new home. Anna Sheldon, the widow of the Society's first Leader, Walter Sheldon, supported the construction of a permanent meeting house with an endowment that was matched by contributions from Society members. Designed by 1904 World's Fair architect Louis Spiering, the Sheldon Memorial Hall was dedicated in 1912 and served as the Society's official home until 1964. The Sheldon now serves as a musical and cultural resource to the St. Louis metropolitan area.

The first meetings of the Ethical Society of St. Louis were held at the Memorial Hall in the Museum of Fine Arts, which stood at 19th and Lucas Place (now Locust Street) in downtown St. Louis. The director of the St. Louis Museum and School of Fine Arts chose to move the collection to its present location in Forest Park following the 1904 World's Fair. Following that move the building fell into disrepair and was demolished in 1919.